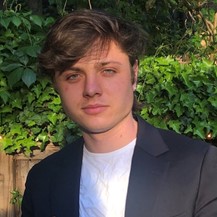 Felix has a lifelong passion for creative work and groundbreaking storytelling.

Originally from London, Felix was a record label assistant for the UK-based Big Dipper Productions, working closely with the internationally recognized band Sigur Rós. In 2019, he was a credited PA on Farewell Amor, nominated for a Grand Jury Prize at the Sundance Film Festival.

Felix first joined GSG as an intern in 2021, shortly after receiving a BA in Honors History at Georgetown University. In his spare time, he enjoys producing music, reading about WWII, and looking after his dog Jazzy.